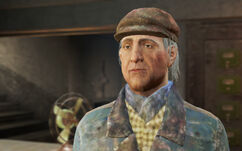 Fred Allen is an associate of Marowski, responsible for the distribution of his chems at the Hotel Rexford in Goodneighbor in 2287.

When not peddling drugs for his boss Marowski, Fred likes to experiment with them. He believes personal experience is key to being a successful chem dealer. Thus Allen documents the reaction to every chem he takes to improve his understanding of the high of each chem he sells. This helps him to better promote his goods and increase his profits.[1]

Fred operates out of the basement of the Hotel Rexford, which the manager, Clair Hutchins, wisens up to because of the unpredictable nature of the peddler's experiments. On one case, Fred had to have Rufus Rubins repair his terminal after accidentally breaking it while high on psycho.[2]

Fred Allen appears only in Fallout 4.

Retrieved from "https://fallout.fandom.com/wiki/Fred_Allen?oldid=3288984"
Community content is available under CC-BY-SA unless otherwise noted.