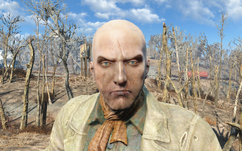 Fred is a man met during the Self Admitted Synth random encounter. Together with Angie, he is holding Jules, a synth, at gunpoint.

By the time the Sole Survivor meets Fred, he states that Angie and he have been traveling for weeks with Jules, who felt secure to reveal his true identity.

Shocked and angered, Fred holds Jules at gunpoint and threatens to kill him, fearing that the runaway synth would send the Institute after them.[1] Jules is being held at gunpoint the whole time and tries to convince Fred to free him so he could go to Bunker Hill.

It is up to the Sole Survivor to decide Jules' fate. One can choose between:

The Sole Survivor can choose to attack Fred and Angie, or pass a medium check letting Jules flee to safety.

Fred appears only in Fallout 4.

Retrieved from "https://fallout.fandom.com/wiki/Fred_(Fallout_4)?oldid=3288982"
Community content is available under CC-BY-SA unless otherwise noted.