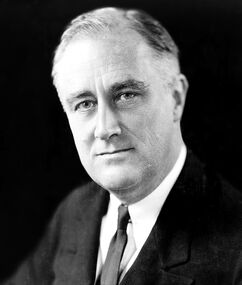 32nd President of the United States

Franklin Delano Roosevelt (January 30, 1882 – April 12, 1945) was the 32nd President of the United States of America serving from 1933 until his death in 1945. His most famous achievements include the creation of New Deal, the allied victory in World War II, the dawn of the Atomic Age, the ideas of the Bretton Woods Conference and the United Nations. He is also known for striving for equality among everyone, not only in the USA, but throughout the world.[1]

Born in Hyde Park, New York in 1882, Franklin was the child of privileged parents. He was the 1920 Democratic nominee for Vice President. In August 1921, Roosevelt contracted Polio, which would force him to use a wheelchair for the rest of his private life. Afraid this would damage his career, he taught himself to walk for short distances supporting himself with a cane. The press was requested to only film or photograph him when he was already standing in position.

He later served as Governor of New York before defeating Herbert Hoover in the 1932 presidential election. As President, he introduced a series of economic policies as a response to the Great Depression, collectively known as the New Deal. After two re-elections, Roosevelt signed and endorsed the Declaration of War against Japan, after the attacks on Pearl Harbor. A few days later, war was also declared on Germany after they declared war on America and sunk several US ships. Shortly after, he instructed scientists to begin development on the atomic bombs, which would end the war in favor of the USA.

He did not, however, live to witness the results of these bombs. On the twelfth of April 1945, Roosevelt died of a stroke. He was elected for four terms and was the only president to serve for more than eight years.

Roosevelt is mentioned on the Capital Preservation Society terminal and in the name of the FDR Island Metro station in Fallout 3. He is also mentioned in Jimmy's diary - May 2nd in Fallout 76. Additionally, Roosevelt's famous speech regarding the declaration of war on Japan can be heard in the intro to Fallout Tactics.

Roosevelt among family in 1941

Roosevelt signing the Declaration of War against Japan

Retrieved from "https://fallout.fandom.com/wiki/Franklin_D._Roosevelt?oldid=3151874"
Community content is available under CC-BY-SA unless otherwise noted.