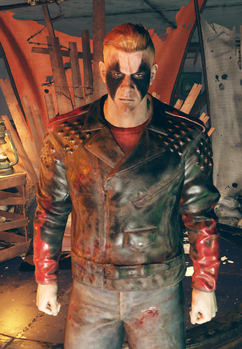 Frankie "the Claw" Beckett is one of the leaders of the Blood Eagles in Appalachia in 2103.

The brother of Beckett, Frankie was left at Foundation while Beckett ran off with Edwin's gang, leaving him resentful and bitter towards his brother. However, while living with the Settlers, Frankie met Ayla, and the pair became romantically involved.[1] Despite these attachments, his resentment at being left behind eventually led him to voluntarily join the Blood Eagles to follow in his brother's footsteps. Nevertheless, the Blood Eagles took him to The Vantage, where he was tortured by The Eye, and forced to eat spiked Buffout and a jar full of eyeballs.[2]

After giving in to the Eagles' demands, he became a member, effectively brainwashed by the drugs. When the previous holder of the role of "The Claw" died, his second-to-none crazed nature made him a natural fit for the role, and he was put in charge of Watoga Underground as one of the Blood Eagles' three leaders in an attempt to disturb Beckett.[3] After the attack on the Underground by a Vault Dweller and Beckett, they enter The Claw's throne room, only for a shocked Beckett to realize that The Claw was his brother the whole time.

At that time, the Dweller can either convince Beckett to kill his brother or talk sense into him, after which he is sent to Ronny either to be buried or to be cured of his addiction. If spared, Frankie will become a wandering merchant who occasionally visits the player's C.A.M.P.

Frankie Beckett appears only in Fallout 76, introduced in the Wastelanders update.

Retrieved from "https://fallout.fandom.com/wiki/Frankie_Beckett?oldid=3378766"
Community content is available under CC-BY-SA unless otherwise noted.