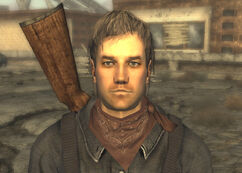 Frank Weathers is a former farmer living in Aerotech Office Park in 2281.

Frank Weathers used to be a farmer but failed, so he decided to move out to New Vegas. Afterwards, he became very abusive to his family, beating them for the smallest things. His family was planning to run away to escape from Frank's abuse, but was captured by Caesar's Legion while traveling to New Vegas. During this, Frank ran and abandoned his family while they were being captured, and hates himself for doing so.

Retrieved from "https://fallout.fandom.com/wiki/Frank_Weathers?oldid=1294941"
Community content is available under CC-BY-SA unless otherwise noted.