Special Agent Frank Horrigan is a super mutant and an agent of the Enclave's Secret Service in 2241.[1][2] He serves as the final boss of Fallout 2.

Frank Horrigan was born in 2211.[Non-canon 1] A huge brick of a man,[3] he used to serve as the personal bodyguard of President Dick Richardson until an undocumented psychotic blunder caused him to be reassigned to wasteland patrol duty.[4][Non-canon 2] It was on one of those wasteland expeditions that he came into contact with the Forced Evolutionary Virus at the Mariposa Military Base and started mutating into a super mutant. The Enclave decided to send him to the Oil Rig for study.[Non-canon 3]

For two years, Horrigan was operated upon, and studied by the Enclave forces while he gradually mutated into a super mutant, both physically and mentally. He was kept under heavy sedation and only allowed to be conscious for short periods of time, during which several violent incidents ocurred.[Non-canon 4] Viewed as a "genetically engineered freak" by his own men, he had been experimented upon and underwent so many changes to his DNA and physiology that he could be described as a one of a kind mutant, becoming more machine than man.[4][Non-canon 5]

When tests began to ran dry in January 2239, the Enclave decided that it was time to redeploy him as a field operative. He was fitted with a custom-engineered set of power armor, and after a few successful field tests, he was assigned to his new role.[Non-canon 6][Non-canon 7] The Enclave took advantage of his low intelligence, further damaged by the FEV, to reinforce his pre-existing loyalty to the presidency and the armed forces by running various conditioning programs on him, ordered under a Presidential Directive.[Non-canon 8]

Controlled injections with a modified version of FEV allowed him to become bigger, stronger and faster than any other super mutant. His armor continually injects him with drugs and other stablizing agents, and is the only thing keeping him alive.[Non-canon 9] He was also fitted with several cybernetic enhancements, including arm control mechanisms, leg rotator mechanisms, and a bionic eye.[5]

Despite his appearance, Horrigan didn't consider himself a mutant, referring to other wastelanders as "muties" instead.[6] To the Enclave scientists, he was an experiment and a freak, and few were willing to accompany him on missions.[Non-canon 8]

Horrigan was extensively deployed to the wasteland, tasked with resolving any situations that may affect the Enclave. On one ocassion, he was tasked with hunting down and recruiting an elderly farmer whose knowledge could prove dangerous, killing him without a second thought when the man refused.[7] He also killed Matthew at the San Francisco Brotherhood bunker following his acquisition of Vertibird plans.[8]

However, he met his match in 2242, at the hands of the Chosen One. When they invaded Control Station Enclave and destroyed its computer, triggering a meltdown, Horrigan personally secured the exit to the PMV Valdez, to prevent them from leaving the oil rig.[9] In the ensuing fight, Horrigan was mortally wounded. Damage to his systems was too extensive and he was blown apart into two halves at the waist.[10] However, this mortal wound didn't kill him instantly. Horrigan still managed to get up on his hands and taunt the Chosen One for the last time, telling them he had activated the self-destruct program and that they will all die in a "big ol' mushroom cloud sendoff."[11] After reciting his oath, he collapsed as the internal pressure blew his head clean off.[12]

Horrigan has 999 HP, and is equipped with two unique weapons normally unobtainable, an End Boss plasma gun and an End Boss knife. He is also very fast, having a great amount of AP (being able to attack several times per round). If his weapons are disabled (either due to running out of ammo, or if his limbs are crippled by repeated aimed shots) Horrigan will engage in hand-to-hand combat with his enemies to the death. Normally, he continually fires his gun until he runs out of ammo, at which point he changes for his knife.

Additionally, Horrigan's armor grants him high resistance against small arms fire, explosions and laser and plasma bolts, but is somewhat vulnerable to electricity. This special cybernetic armor cannot be bypassed even by critical hits, which makes him extremely hard to kill, even relative to his high number of Hit Points.

"You've gotten a lot farther than you should have, but then you haven't met Frank Horrigan either. Your ride's over, mutie. Time to die."

Frank Horrigan is the final boss and antagonist of Fallout 2, who also appears in a special encounter early in the game killing some defiant "peasants." He is also seen killing Brotherhood of Steel agent Matt in a cutscene in the San Francisco Brotherhood outpost if the Chosen One accesses the ACE computer terminal and asks what happened to him. Analogously, another scene of Horrigan killing deathclaws can be seen in Vault 13 after the Enclave raids it a second time. He was a talking head voiced by Michael Dorn (who also voiced Marcus).

In the SFall 3.2a version of Fallout 2 (shipped with the game if purchased from Steam), Frank Horrigan may be completely impervious to damage dealt by the Chosen One during the final battle, only receiving damage from the turrets and Granite's squad if they are made friendly. It is unknown if this is an avoidable glitch, or a permanent glitch with the game's version. [verified] 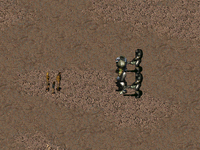 Special encounter with Frank Horrigan trying to get a family to join the Enclave, later killing them

Frank Horrigan at the San Francisco Brotherhood outpost with Matthew

Horrigan size compared to other characters 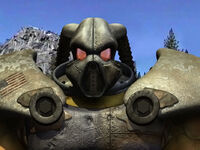 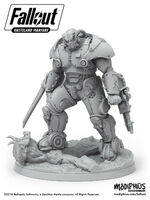