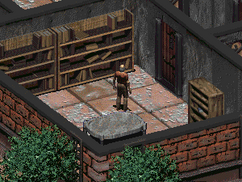 Vice President of the NCR

Vice-president Frank Carlson is an authoritarian NCR politician in NCR during 2241.

While elderly and frail,[1] he is nonetheless a power to be reckoned with. Residing within a high security compound in NCR Town, he is the most important militant member of the NCR government, determined to attain even more power by any means necessary, including manipulating the public opinion to impeach President Tandi and take over her position as the head of the Republic, despite the fact that she (and many of her associates) are fond of him.

Frank Carlson appears only in Fallout 2.

Retrieved from "https://fallout.fandom.com/wiki/Frank_Carlson?oldid=3073073"
Community content is available under CC-BY-SA unless otherwise noted.