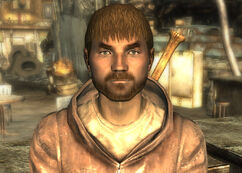 “This is your last mistake, little bartender!”— Ymir

Frank is the slave bartender of Paradise Falls in 2277.

Captured a few months back during a raid just north of Megaton, Frank has yet to adjust to life as a servant and acts up constantly. He has been placed in charge of drinks at the bar, as bar patron Ymir does not take kindly to his drinks being spilled.[1]

Frank appears only in Fallout 3.

It is possible that if one attacks his body with a weapon even after he is dead, the slavers will turn hostile. [verified]