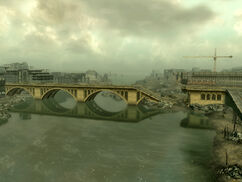 Francis Scott Key Bridge (named the Potomac Bridge in the game guide) is an unmarked location in Fallout 3.[1]

The Francis Scott Key Bridge crosses the Potomac River north of Jefferson Memorial, from the Citadel in the direction of Washington Monument. It is in a severe state of decay and contains numerous ruined vehicles top-side, a portion of the bridge has collapsed into the Potomac River.

North of the bridge, east end, between the scavenger and raider camp, is a grave with search party log #3 for the Searching for Cheryl unmarked quest.

Retrieved from "https://fallout.fandom.com/wiki/Francis_Scott_Key_Bridge?oldid=3450183"
Community content is available under CC-BY-SA unless otherwise noted.