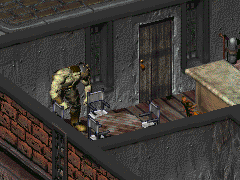 Beat Francis at armwrestling
Find the missing people for Marcus

Francis is a super mutant living in Broken Hills around 2241.

Francis is a powerfully built super-mutant. He is clad in black leather, and boredom is written across his face.[1] In the Broken Hills bar, he will challenge people to arm wrestle him. If they lose, they become his gimp for the night.

If the Chosen One has beaten Francis at arm wrestling and received a power fist, another power fist can be looted off of Francis after he is killed.

Francis appears in Fallout 2 and is mentioned Fallout Bible.

Retrieved from "https://fallout.fandom.com/wiki/Francis_(Fallout_2)?oldid=3359257"
Community content is available under CC-BY-SA unless otherwise noted.