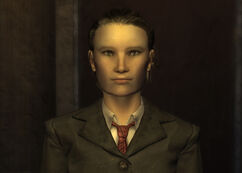 Casino owner
2 of Spades (with James)

“We've got liquor, chems, and whores a plenty. Pick your fix and we'll oblige. Our only rule is no sampling the merchandise. Caps paid in advance.”

Francine Garret is co-owner of the Atomic Wrangler casino, along with her twin brother, James. She lives in Freeside in 2281.

Sister of James Garret and co-owner of the Atomic Wrangler casino, Francine appears to be the business and financial account of the Wrangler, handling its profits and interest. She is rather uptight about her business and will do anything to keep the Wrangler star attraction of Freeside, as she lets James take care of its entertainment and appearance.

After the quest Debt Collector, the option to ask about Santiago and how much he owes her will still be there. [verified]

The Garrets on the playing card
Add a photo to this gallery
Retrieved from "https://fallout.fandom.com/wiki/Francine_Garret?oldid=3173672"
Community content is available under CC-BY-SA unless otherwise noted.
... more about "Francine Garret"
RDF feed
Has platform
PC +  and Xbox 360 +