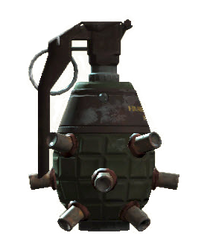 The fragmentation grenade MIRV is a weapon in the Fallout 4 add-on Nuka-World.

Fragmentation grenade MIRVs are explosive grenades that detonate into several other grenades. Despite the listed damage of 1, each bomblet detonates as if it were its own grenade, making it a devastating weapon.

One can be found on each of the three gang bosses in Nuka-World:

Retrieved from "https://fallout.fandom.com/wiki/Fragmentation_grenade_MIRV_(Nuka-World)?oldid=3116508"
Community content is available under CC-BY-SA unless otherwise noted.