The fragmentation grenade is a weapon in Fallout 4.

Fragmentation grenades are generally simple and effective thrown explosives. They are widely used throughout the Commonwealth.

Almost every type of enemy can use these grenades, such as raiders, super mutants and Gunners. They are more easily found mid-game or on mid to higher level enemies (level 10 and beyond). 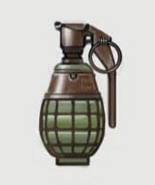 From The Art of Fallout 4
Español Русский Українська 中文
Community content is available under CC-BY-SA unless otherwise noted.
Advertisement