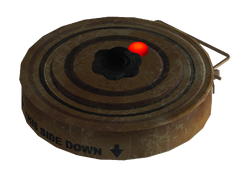 The frag mine is a weapon in Fallout: New Vegas.

The frag mine is a placed explosive device. When approached by an enemy it begins beeping shortly before exploding. It can be disarmed while close to it by interacting with it. Like other land mines, it cannot be used in V.A.T.S.