Foxes are creatures found in Appalachia.

Foxes in Appalachia have not undergone any apparent major mutations, but have suffered from some degree of hair loss. Much like the squirrel, their general appearance has remained largely the same as those living prior to the Great War, with only a few minor changes, such as their larger ears.

Foxes will not actually attack the player character, they will instead run away when approached. They often stick together in packs.

A standard, adult fox that travels the Appalachian wasteland.

Foxes appear only in Fallout 76. 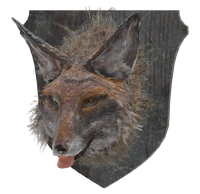