The Four Leaf fishpacking plant is a location in the South Boston neighborhood of Boston in 2287.

Before the Great War, the plant was operating on a deficit and was threatened with bankruptcy, partly due to mismanagement and partly because of the wastewater runoff from the nearby General Atomics factory. In more recent history, the plant has become the site of Marowski's secret drug lab, which provides Goodneighbor with a steady supply of chems.[1]

The plant consists of a ground floor covered with conveyor belts and a series of catwalks extending all over. The east end has a stairway leading down under the main floor to a basement containing mostly piping, generators, and maintenance areas. To the west is a security door unlocked by a Novice-locked terminal that leads into a storeroom housing a Protectron pod.

Marowski's chem lab is on the top floor of the plant, but can only be accessed by either hacking the Master-locked terminal on the wall outside the hidden door found via the exterior catwalks on the roof, or by tripping the lasers outside as per Trish's note obtained in the quest Diamond City Blues (that is: the one beside the trailer truck beneath the plant's sign, then the one attached to the stairwell on the south side of the plant, then the one in front of the double door entrance, then the one attached to the trailer truck, and finally the one on top of the roof, down the catwalk on the west side of the building). These tripwires cannot be disarmed, and can be hard to see in the morning. They will remain off if triggered in the correct order; should an incorrect tripwire be triggered, all of them will come back online.

The drug lab itself is much simpler than the way to get in. The front two rooms contain a total of four chemistry stations. A third room to the east is covered in mattresses and serves as the chem workers' sleeping quarters. A door to the west accessible only from this side leads back into the fishpacking plant, to a broken catwalk.

A Protectron unit may be activated via a Novice-locked terminal to help clear out the ground floor.

The Four Leaf fishpacking plant only appears in Fallout 4. 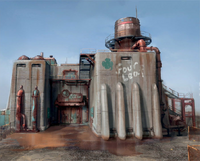 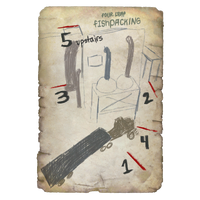