Increased chance for hits in V.A.T.S. to fill the Critical meter

Each hit increases the chance the critical meter will fill 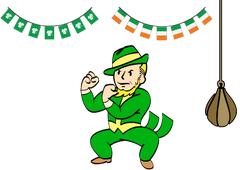 Four Leaf Clover is a perk in Fallout 4 and Fallout 76.

Vault Boy's outfit and fighting stance in the perk icon are a reference to the University of Notre Dame's mascot, the Fighting Irish. [1]