Hello fellow Nukapedians, some of you may know that the FCC ruled against the idea of Net Neutrality early this year. What's net neutrality? In a sense, net neutrality is the idea that data over the internet is accessed at the same speed no matter the content. A blogpost on Community Central is reaching out to other wikis to rally support for Fight For The Future, a petition that sets out to have the FCC reclassify ISPs as common carriers that provide a utility. I come to you to ask if we would like to have Nukapedia support this petition.

How would we support this?Edit

Nukapedia would support this by placing a banner that would allow users to sign the petition right from said banner (See the bottom of Brandon Rhea's blogpost for an example). I'd like to propose that Nukapedia would keep this banner on out home page for the span of one week.

Another Course of Action: The FTFF banner is fairly large, to the point were it might detract from the ease of navigation on our home page. So, below is a simple image banner that links to the FTFF sign up main page where users and read up on the topic and sign the petition if they desire to. This way we can support FTFF in a manner that doesn't prohibit our users from navigating the home page. 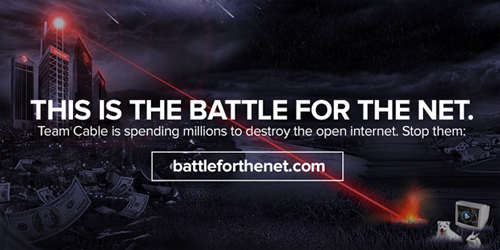 Place any thoughts and/or questions you have below. Thanks for your consideration and I'll see you all around. --

Just like the old PIPA/SOPA thing, I would oppose participating as a wiki in this. Our focus is on the content of the Fallout series and other relevant material, and adopting political positions as a whole wiki is not what we are here for. While our members will always have a diverse set of beliefs and views, the wiki as a whole must always remain neutral and focus on what the wiki exists for. --Skire (talk) 02:09, September 11, 2014 (UTC)

I have to agree with Danny - as an encyclopedia, it is not our place to force any sort of political/ideological views down anyone's throats. I have already opposed the removal of net neutrality personally with a letter, and Wikia Staff are already throwing in their support. It might be good to let everyone know the situation at hand, since this does affect Wikia and its wikis, but the PSA needs to be neutral, so that everyone can create their own opinions on the matter, and handle it personally instead of having our wiki make their decisions for them by default.

I can't really argue with that. We're here to create a resource of all things Fallout and it's best if the site stays neutral as Danny stated. We could move forward with a neutral PSA of sorts, though that might border us being a news site. Which would bring us back to the same question, "this relates to Fallout how?" --

It would relate to the upkeep of our wiki and community. Net Neutrality does affect us, to a large degree, which means it is an important topic to cover, so that we may educate our editors and viewers.

I can. It doesn't really matter what we're here for, we as a wiki have all the business in the world supporting the freedom of the internet. Staying 'neutral' in an issue with such vital importance to the future of the wiki itself, is a lazy cop-out. The question is, are you capable of being proactive?

I am not saying we, as individuals, should remain neutral: like I said, I have already written, and sent out, a letter, to oppose the removal of net neutrality. But as an encyclopedia of knowledge, we do not need to start upholding political agendas, which not everyone is going to agree with. We could even have a vote, but in the end, it would be 10-30 users making a decision for the hundreds of thousands of other viewers we have here. There are a ton of people that support the removal of net neutrality, and I have seen some rather legitimate arguments from the other side, regardless of me still disagreeing with them. With Wikia Staff already opposing this, there is no need, at all, for our wiki to get caught up in creating a political visage, when we could, and more professionally, satisfy ourselves with educating our users, instead.

I'm in no doubt that we, a site on internet, relate to net neutrality. While it's also an important topic to cover, not many people come to a Fallout wiki to learn about it and any attempts to educate our user base would likely be overlooked. --

Just because not many users comment, does not mean our articles go unnoticed. If you ask an administrator, they can provide you with our daily numbers, which shows that, like I had said earlier here, hundreds of thousands of viewers visit our site daily. There is no such thing as an article here that has not been scrutinized by countless people - especially if we feature it on our front-page.

So we as a wiki either quietly and productively edit articles whilst simultaneously taking it up the rump with no vaseline from Comcast and Verizon, or we as a wiki stand against that. That's really what it boils down too. I think a lot of people would distance themselves from the wiki if we made it seem like theirs a middle-ground in this situation, when there really isn't. It's either let corporations run the internet, or let the internet run the internet. I don't see any logic in supporting the former, none.

I understand that we get hundreds of thousands page clicks per day (don't know the number of visitors), if the community is fine with putting a up blogpost that will be featured on the Community Features section of our home page, I have no qualms with doing so. --

So make a poll asking who supports it or not. If the votes come out against it, we remain neutral. If they don't, well, we as a wiki become unified (imagine that!). I don't think there'd be but maybe two or three votes against this, quite frankly.

"We could even have a vote, but in the end, it would be 10-30 users making a decision for the hundreds of thousands of other viewers we have here."

By god then, so be it. That's never stopped the result of any poll here making any sort of wiki-wide decision.

Apples and oranges - there is a difference between a decision that only affects the immediate wiki, and then there are decisions involving politics which are larger than this wiki and the few voters that might contribute feedback.

I have written about this topic specifically, an essay that shows both sides but largely leans towards net neutrality. I could condense and post it in my blogspace, though I dunno if that constitutes as something suited for our homepage. --

Regardless of its ultimate notability on this wiki, I would love to give it a read. :) If you jump on the Moose sometime, I can share with you my E-Mail.

Okay :3 It's kinda dry, but I have no issues sharing it. If you're available, I'll jump on the Moose now. --

My objection primarily comes down to the US centric nature of this campaign, and the global reach of our audience. Any political stand we make I think needs to reflect our global nature. Agent c (talk) 10:45, September 11, 2014 (UTC)

Good point. Even if we were to engage in political stance-taking, this is strictly a matter for one country (as of now, at least). --Skire (talk) 21:56, September 11, 2014 (UTC)
Just for your info, it appears this discussion was done after Sept 10th (the blackout day) and Wikia as a whole entity participated. They are based in the US and this really affects not just the US but everywhere in the end. As for the 10-30 people making decisions for "100's of thousands" of people, that is a lame cop out. Does that apply to every poll we have had including policy and admin polls as well? And the apples and oranges analogy does not apply as there really no such thing as the "immediate" and "the whole" wiki, they are one and the same. I, personally am glad Wikia participated.--Kingclyde (talk) 08:51, September 21, 2014 (UTC)

i guess restricting this battle regarding online freedom of speech to only US is not fair. if you guys see the perspective of all the binge watchers all around the world, they are the one who are or will suffer if there is no net neutrality left. The initiative taken by Nukapedia is brilliant but i guess majority of users don't have much knowledge regarding why people like us who are really concern for our online privacy and this battle for the net[1]. In this way we will be at better position in defending our concerns to protect net neutrality with this outstanding campaign.

Retrieved from "https://fallout.fandom.com/wiki/Forum:Battle_for_the_Net_-_Nukapedia_Support%3F?oldid=2985024"
Community content is available under CC-BY-SA unless otherwise noted.