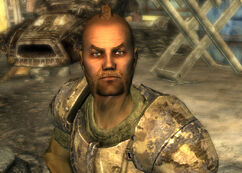 “So I look like I wanna be talking to you, scrub?”

Forty is a slaver at Paradise Falls and is Eulogy Jones' fairly dim-witted second-in-command in the year 2277.

Born in 2222,[1] Forty is Eulogy's second in command and earned his nickname from the fact that, throughout his life, he has killed 40 men. However, killing slaves is something Forty considers "sport" and doesn't count toward his total.[1]

Forty appears only in Fallout 3.

Retrieved from "https://fallout.fandom.com/wiki/Forty?oldid=3245824"
Community content is available under CC-BY-SA unless otherwise noted.