Increased chance to find larger amounts of caps in containers

“You have the talent of finding money. You will find additional money in random encounters in the desert.”— Fallout description

Fortune Finder is a perk in Fallout, Fallout 2, Fallout 3, Fallout: New Vegas, Fallout 4, Fallout 76 and Fallout: The Board Game, as well as a skill in Fallout: Brotherhood of Steel.

With this perk, one will find either twice or three times the normal amount of money in random encounters, depending on the encounter type.

“With the Fortune Finder perk, you'll find considerably more Nuka-Cola caps in containers than you normally would.”

With this perk, one will find considerably more bottle caps in containers than one normally would. This is done by enabling two leveled item lists (CapsChangeFortuneFinder and CapsFortuneFinder) which have a 10% chance to contain 20-80 or 110-190 additional caps, respectively. The "change" list is used by nearly all ant refuse piles, cash registers, desks, footlockers, filing cabinets, gore bags, gun cabinets, lockers, metal boxes, and ruined school desks. The latter list is used almost exclusively by safes (including wall safes and floor safes) and scales with the player's level, limited to 110 caps at level 1 and adding a chance for 10 additional caps per level, up to the maximum of 190 caps at level 9.

In the Fallout: New Vegas add-on Dead Money, this perk also affects Sierra Madre chips, using an add-on-specific pair of lists (NVDLC01ChipsChangeFortuneFinder and NVDLC01ChipsFortuneFinder) which have a chance to contain 20-80 or 110-190 additional chips, respectively. The "change" list is used by most cash registers, desks, dressers, filing cabinets, footlockers, unlocked metal boxes, night stands, unlocked suitcases, and wardrobes found in and around the Sierra Madre Casino & Resort. The latter list is used only by locked metal boxes and locked suitcases, and scales in amount from level 1 to 9.

This perk allows caps to be found in random containers such as cabinets, desks, metal cabinets etc. It works similar to the Scrounger perk. If both Fortune Finder and Scrounger are obtained one will find both caps and ammunition in the same containers. If one is the type of player to search extensively through the locations visited then this perk will be a wise investment.

Upon reaching level 4 in Fortune Finder there is a chance with every kill that caps will explode from the enemy killed. Upon death, there is a sound of caps hitting the floor (similar to what can be heard when a game machine lets out coins) and a large animated icon of Vault Boy appears on the screen. One will see a large amount of caps around the body and will need to move over it to collect. One does not have to pick up each individual cap, once the 'pick up/use' key is pressed it will collect them all. The amount of caps dispersed is about 15 to 30. It can be difficult to see the caps and if there is a large battle they can easily be missed. Deaths caused by the Mysterious Stranger perks can also activate the caps explosions.

“You're a human metal detector.”

The audible sound clue of a caps stash will play even if the container is actually empty. Pressing the transfer button to enter the container menu and then exiting the menu should stop the sound from playing further, unless the player enters an interior or switches servers.

With each level of this skill, one's chances of finding valuable items and money go up by 20% (up to a maximum of 100%). To take it, the player must be level 5.

Once obtained, it can be discarded to obtain eight bottle caps.

The image for this perk in Fallout: Brotherhood of Steel is directly inspired by the Indiana Jones series. 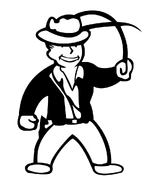 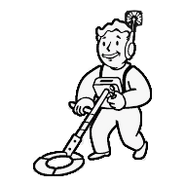 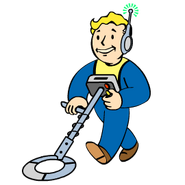 Fallout 4 loading screen slide
Add a photo to this gallery
Retrieved from "https://fallout.fandom.com/wiki/Fortune_Finder?oldid=3438826"
Community content is available under CC-BY-SA unless otherwise noted.