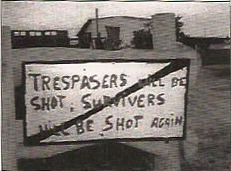 Image used as concept design for Fort Worth in the FO:BOS2 design document

Fort Worth is the largest Brotherhood of Steel outpost in the Texas Wasteland.[1]

Fort Worth is a Brotherhood of Steel base. By the time the player character gets there, havoc has already been unleashed by the Jackals. Dead bodies everywhere, broken and smoldering walls.[2]

On the upper level, two huge tanks sit in the courtyard; the player character will have to figure out a way to get past them. This map is a medium size. Once inside, the base leads into underground levels consisting of three large maps rigged with Brotherhood traps.[2]

Fort Worth was going to appear in the canceled Fallout: Brotherhood of Steel 2.

Retrieved from "https://fallout.fandom.com/wiki/Fort_Worth?oldid=3216277"
Community content is available under CC-BY-SA unless otherwise noted.