Fallout 4
“Before the war, Fort Strong was a U.S. Army base and proving ground for experimental weapons, like the Fat Man nuclear catapult. It has since been overrun by Super Mutants.”— Fallout 4 loading screens

Fort Strong, or Fort Strong U.S. Army Depot, is a location in the Commonwealth in 2287.[1]

Dating back to the Civil and Revolutionary Wars, the fort was used in the past as a gun battery.[2] The fort was repurposed in the 2050s by the US military as a weapons research facility, with the interior renovated and a new basement research level constructed.[2]

General Brock took command of the facility in 2075 and prepared the location for weapon and power armor testing by leveling the old barracks and constructing a simulated town.[1] It was at this location that Brock devised two teams - Alpha working on T-51B power armor and Bravo working on M42 "Fat Man" Launchers.[3][4]

In June 2076, Alpha Team shipped the first line of T-51B power armor units to the front in China, and reports indicated performance above what was anticipated.[5] Although Bravo Team struggled at first to perfect the firing mechanism of the M42 Launcher, testing resulted in perfecting the calibrations.[6] In September 2077, the base had already shipped the launchers to a supply yard in Mississippi, but were waiting for authorization to transport the stored warheads to their intended destination.[7]

From the north end of the bridge leading to the fort, there is a guardhouse on the east side containing leveled power armor and an ammunition box in the southeast corner. Across the bridge to the south is a collapsed building which was previously sealed off by a fence, with a couple of radioactive barrels inside.

Continuing along the road leads to the main complex, where three super mutants can be found patrolling. If the quest Show No Mercy is active, a super mutant behemoth will also be present. The road forks to the left, with a cemetery immediately east of the building on the north side of the road. Two teal vases and a toy car can be found here, while wild tato blossoms and wild corn can be found by the entrance and in the buildings on either side of the road. The buildings themselves hold radioactive barrels, desks, filing cabinets, and scattered junk items. Behind the easternmost building is a partially collapsed wooden dock with a sandbag wall built upon it.

At the top of the path leading to the armory, just north of the building are two short sets of stairs. The near stairs lead up to the flagpole, where three more vases and a wild tato blossom can be found. The far stair lead up to two cannons, where five cannonballs can be found (four in a pile in the center, and one farther to the right). Three more cannons are on the south side of the building, with another pile of four cannonballs to the side of the central cannon and a final cannonball next to the cannon on the right. Another ammunition box is in a nearby alcove in the south wall of the building.

The armory is the main administration and storage building of Fort Strong. From the main entrance, the second-floor walkway has collapsed, creating a ramp. At the top of the ramp are an ammo box, six desks, a filing cabinet, and a bank of filing cabinets. The door on the north side is blocked, but a Fat Man can be seen beyond it, through the broken door panel; this area of the building cannot be accessed. Returning to the first floor, there are two doors: the door to the south has a Novice lock which can be opened with the Fort Strong key, and the door to the north leads into a hallway that loops around the building back to the door to the south.

Heading north, the doorway on the west side of the hallway is guarded by a lone super mutant. The west room features several junk items and Private Murnahan's holotape on the desks lining the walls. Turning east at the end of the room, a collapsed wall leads into the kitchen. East past the kitchen is the mess hall, guarded by two more super mutants. Turning south after the mess hall counter and going through the door on the west side will lead back into the hallway.

Looking directly west from the mess hall door, there is a baseball display on the left wall containing a poster and two baseballs on small wooden pedestals. Turning south from the door will enable one to continue through the hallway. Directly to the east is the elevator to the sublevel, which is blocked until the quest Show No Mercy has been started. Looking through the collapsed ceiling to the west, one can see the main entrance.

Continuing to the south, there is a small restroom through the door to the west containing a first aid box. Just beyond this door on the east side is the entrance to the auditorium; behind the collapsed floor in the northeast corner of the auditorium is a cooler.

Scaling the collapsed floor up to the barracks on the second floor above the auditorium will provide access to the usable bunk beds, a footlocker in the southeast, and a door in the south corner of the west wall. Passing through the door will lead to a hallway lined with lockers and another barracks on the opposite side; this second barracks contains three more footlockers, two sets of lockers (one of which hides a caps stash), two cabinets, a metal box, and more assorted junk items to loot. From here, one must return to the first floor via the collapsed floor of the first barracks and out the auditorium door to continue.

Looking west from the auditorium door, two ammunition boxes are on a desk to the left. Turning right at the end of the corridor, one will see the locked door back to the main entrance. Facing west, one can see a desk and another Novice-locked door on the south wall. Picking this lock will lead into General Brock's office, containing General Brock's terminal, a U.S. Covert Operations Manual, a trunk to the west, a mini nuke in the southwest display case, and a Master-locked safe in the southeast corner. Inside Brock's desk is the Fort Strong key, which will open both the safe and the door to the north back to the entrance.

From the entrance to the generator room, one can turn south and follow the stairs down to the lower floor. Immediately on the right is a door leading into a corridor to a room filled with consoles. The northeast door in the room leads directly into another room, where a mutant hound can be found sleeping by the west exit back into the generator room. Northwest of the generator is another corridor.

On the east side halfway down the corridor is a lab, which contains Bravo Team's testing terminal by the window in the south. The room across the corridor to the west has a Novice-locked floor safe in the southeast corner.

Continuing through to the end of the corridor and turning right will reveal a small room. In this room is a floor trolley with an open crate of mini nuke parts and two mini nukes on the shelves to the north. On the south side of the room is a security cage with the door missing, inside of which is an ammo box and a first aid kit.

Heading through the east doorway will lead into the mini nuke storeroom, but the only way down from here is to jump off the gantry to the floor or onto the forklift immediately in front and climb down. The door in the northeast corner of the storeroom connects to the corridor that leads back to the small prior room.

Fort Strong appears only in Fallout 4.

Charge card inside the dumpster

Inaccessible shower room, looking back to the room containing the Fat Man

Generator in the sublevel

Bravo Team terminal in the sublevel

Mini nukes in the sublevel

Mini nuke storeroom in the sublevel 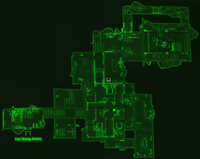