“If anyone finds this note, stay the hell away from this place. If the feral ghouls don't get you, the robots will. There's radiation everywhere. I think they used to make nukes here, or maybe they just kept them, I don't know.”— Tara's final words

Fort Constantine is a large outpost and ICBM launch facility in the northwest Capital Wasteland, between the SatCom Array NW-05a and SatCom Array NN-03d. It is heavily guarded by a wide variety of robots, including sentry bots, Mister Gutsies, robobrains and protectrons, inside and out.

Fort Constantine is a military base built by the US Army in 2043. It was used to build and store nuclear bombs, and also the top secret power armor that was under development at the time. In 2257, Allistair Tenpenny hired 5 mercenaries — Mister Crowley, Dave, Dukov, Jeff Strayer and Tara Fields — to retrieve a rare weapon from the fort. It is unknown what weapon Tenpenny was after, but the mercs completed the mission goals and were paid. In the bunker, Tara was killed by a group of feral ghouls and Crowley was locked in the same room (from this we learn feral ghouls do not attack human ghouls which is how Crowley escaped). Crowley supposedly found the T-51b power armor in Fort Constantine, at which point he became obsessed with it. The rest of the group, knowing Tara was dead and thinking Crowley was dead as well, went their separate ways.

Years later, Mister Crowley, now living in Underworld, wants the player character to find all the other surviving mercs (except for Jeff Strayer, whose son, Ted Strayer, holds the key required by Crowley) and shoot them in the head, then return the keys.

The doors to the bomb storage (warhead storage) are both locked with a Very Hard lock, but the bomb storage basement can be alternatively accessed through an underground path in the cellar of the CO quarters. (The floor plan picture for the launch control bunker has been mislabeled. The north door connects to the CO's quarters, the southern one leads to the bomb storage section.) The Fort Constantine bunker door can be opened only with Ted Strayer's special key and cannot be lockpicked. Also, the only access to the T-51b power armor is through this pathway, as the door can't be opened from the other side in the bomb storage, because Tara holds the key. However, the cellar grants access to the launch control bunker, eventually leading to the basement of the bomb storage. The door to the bomb storage requires Dukov's special key. In here is Tara's corpse, (which holds the warhead storage key), two Very Hard locked doors and a door (can be accessed only with Dave's special key) on the opposite side which finally leads to a room with the T-51b power armor.

The CO quarters contains the Fort Constantine launch codes stored in a small safe in the cellar next to the Big Guns bobblehead. These can be used to launch the ICBM from the Fort Constantine launch control terminal in the launch control bunker. After attempting to launch the ICBM, the launch terminal reports an error and mentions that the missile's tracking system is damaged and the navigation data is corrupted. The alarms will sound and the doors will shut, but only for a few seconds and open again afterwards, or they can be opened manually (they don't lock).

Fort Constantine appears only in Fallout 3.

The launch codes found in Fort Constantine are "00000000," a reference to the United States nuclear launch codes which were created in 1961 during the Cold War and weren't changed to legitimate codes until the year 1977.[1] 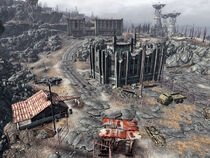 Ft. Constantine silo view
Add an image to this gallery

Retrieved from "https://fallout.fandom.com/wiki/Fort_Constantine?oldid=2760663"
Community content is available under CC-BY-SA unless otherwise noted.