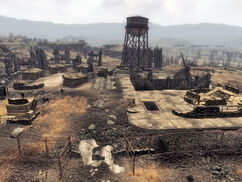 “This is what happens to people who fuck with the Brotherhood.”— Unnamed Brotherhood of Steel soldier

Fort Bannister is a pre-War military installation in the Capital Wasteland, north of Evergreen Mills and south of Jalbert Brothers waste disposal.

When the Great War came in 2077, it was one of the highest profile targets in the area, suffering a number of direct nuclear hits that obliterated much of its surface facilities, leaving a gaping crater and concrete ruins behind. The nuclear detonation did not destroy the bunker's underground installations, however, which was likely the main reason it was secured by Talon Company mercenaries and used as their primary base.

Interestingly, its missile silo doors reside in a ruined building. As the building has a roughly circular pattern of destruction, which centers on the silo doors, one can gather that the building itself collapsed when a missile plowed through it, most likely at the start of the Great War.

The bunker itself is extensive and is accessible from the ammunition storage, a manhole inside a lone commander's tent, a bunker entrance just above the Commander's Tent, and a metal door down some steps just to the right when entering Fort Bannister through the south gates.

The underground levels of the fort are crawling with hostile Talon Company mercs who are all very heavily armed. If your combat skills are high enough to clear the place out, the area contains a staggering amount of valuable hardware to scavenge. The mercenaries here have a wide range of armaments, including assault rifles, Chinese assault rifles, combat shotguns, laser rifles, flamers, missile launchers and 10mm SMGs.

In the commanding officer's quarters are Commander Jabsco, the leader of the company, a Mister Gutsy (though the Mister Gutsy model may be found in a dormant state, and likely activated once you attack Jabsco) and two automated turrets. However, the first of these turrets (the one upstairs) can be either deactivated or frenzied via a locked terminal just outside the commander's personal quarters. It should be noted that although the frenzied turret will track and attack Commander Jabsco, it rarely fires at him when he has a melee weapon armed.

The commander himself starts off with a missile launcher, but once he runs out of ammunition for that, he will either attack with his Occam's Razor, pull out his Chinese pistol, or rush downstairs and grab any weapon in the nearby safe. There is also a chance that once you attack the commander, more Talon Company mercs will spawn behind you. He will actually call out for assistance when the conditions for reinforcement have been met.

In Commander Jabsco's personal quarters there are four generators which will explode when shot or sufficiently damaged by explosives.

With the Broken Steel add-on installed, you should find several Aqua Pura pack brahmin near the tents. When searching the tents, you should also find Brotherhood Paladin Jensen tied up. He tells you that the Brotherhood is tired of having their aqua pura stolen by Talon Company, and intends to get some payback - Jensen is the scout for the operation.

If you free him, he'll charge down into the fort, quickly getting himself killed by the awaiting turret and the missile-launching Talon Company merc. Soon there after, two to four more Brotherhood of Steel Knights and Paladins will run in after him. The Talon Company defenses will shortly prove too much for the Brotherhood, and most of them will likely die. Alternatively, it is also possible that the Knights will defeat the mercs and occupy Fort Bannister if the player decides to assist them. It will become another BoS outpost soon after.

After The Waters of Life quest, an Enclave research outpost can be found near the large crater, with a field research terminal containing their objective in the area (gathering samples). The camp is occupied by three Enclave soldiers, one Enclave officer, and one Enclave scientist. There is also an Enclave turret. There are three Enclave crates in one of which you can store gear (the crate at eye level, behind the computer terminal). In the crater there are eight alien power cell cartridges underneath the over turned truck. There is a constant low level of radiation (+1/2).

Fort Bannister appears only in Fallout 3.

For. Bannister main back door

Crater in the Enclave sector 762 East of Fort Bannister

Fort Bannister Main interior
Add an image to this gallery
Retrieved from "https://fallout.fandom.com/wiki/Fort_Bannister?oldid=2687565"
Community content is available under CC-BY-SA unless otherwise noted.