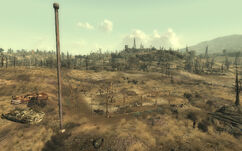 Fordham Flash Memorial Field is a baseball field in the Capital Wasteland in 2277. It is located east of Arefu. The chain-link backstop can be easily seen from a distance with some dead bodies hanging from it. It is very close to the Moonbeam Outdoor Cinema.

Two raiders have made this place their own, with mutilated corpses hanging from the backstop. There are a few benches behind the backstop, and the bases and pitcher's mound are still marked out. Suitably, at least one raider wields a baseball bat.

Northwest of here, due east of the Arefu bridge, is a dock with a first aid box and a trunk on it. While on the dock, a bottle of Nuka-Cola Quantum can be found on the left side on top of a pole in the water.

"The Fordham Flash" was one of the nicknames of Francis "Frankie" Frisch, a 20th-century baseball player.

Retrieved from "https://fallout.fandom.com/wiki/Fordham_Flash_Memorial_Field?oldid=3218018"
Community content is available under CC-BY-SA unless otherwise noted.