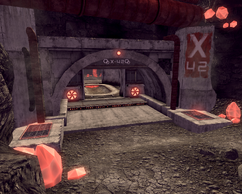 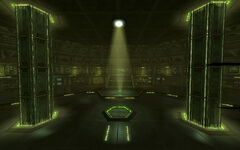 The Forbidden Zone dome, known as the X-42 robo-warfare facility before the exile of Mobius, is a location in the north-east section of Big MT. It was originally named the X-42 robo-warfare facility, but was changed by Mobius after he left the Think Tank. The door to this facility is locked until the player character has spoken to Doctor Klein as part of the main quest line Old World Blues.

The Forbidden Zone's dome is similar to The Think Tank's, but is in significantly worse condition: the lighting is a sickly green, the equipment is rusted, broken, or otherwise mostly unusable, and Dr. Mobius has covered most of the surface in the main room, specifically the center, with intricate scrawls of notes and formulas. In the six smaller rooms located off the upper tier, stored office furniture containing random loot can be found, along with what appears to be Dr. Mobius' private stash of Mentats. Located at the top of the main staircase, in a storage tank, is the Courier's brain. Unlike the Think Tank's dome, however, instead of five lights located on the front platform, there is only one.

The name of the facility is a reference to the 1956 science fiction film Forbidden Planet. Dr. Mobius himself was partially inspired by the movie's main antagonist, Dr. Edward Morbius.[1] 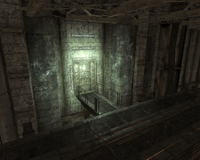 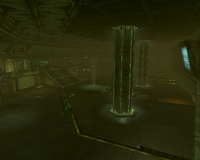 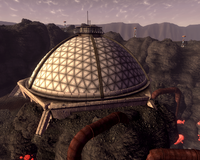 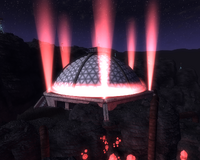 X-42 dome at night
Add an image to this gallery

Retrieved from "https://fallout.fandom.com/wiki/Forbidden_Zone_dome_entrance?oldid=2870722"
Community content is available under CC-BY-SA unless otherwise noted.