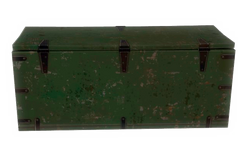 The footlocker is a settlement object and container in Fallout 4 and Fallout 76. In Fallout 76, they require plans before they can be crafted.

The foot lockers are green narrow boxes, roughly the width of a bed. It has a flat lid along the top, with three hinges. The only means of locking a footlocker is by inserting a form of padlock in the latch loop at the front.

The footlocker is located under Furniture → Containers in the workshop.

Although footlockers are commonly found around the Commonwealth, the following areas have several:

Knight Lucia's footlocker on board the Prydwen

Initiate Clarke's footlocker on board the Prydwen

Footlocker containing the password for the lockup at Coast Guard Pier

Footlocker containing the back storage key at Starlight Drive In

Clark's stash
Add an image to this gallery
Retrieved from "https://fallout.fandom.com/wiki/Footlocker_(Fallout_4)?oldid=3129853"
Community content is available under CC-BY-SA unless otherwise noted.