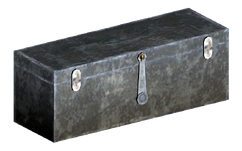 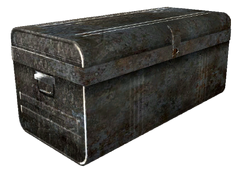 Footlockers are containers in Fallout 3 and Fallout: New Vegas.

They can be found almost anywhere. They are silver in color and mostly hold bottle caps, ammunition, and sometimes armor, clothing, and Stealth Boys. Unless found in a settlement or building, they are usually not locked. The lock difficulties on footlockers can range anywhere from very easy to very hard. Just like any other lock, it is possible to break the lock while attempting a force lock, thus keeping the player from the contents unless using the Infiltrator perk. They can also be found in safehouses. Most of them can be safe to store things in it.

Personal footlockers can be found in the same places as regular footlockers. Most of the time (but not always) footlockers are named "personal" because it contains special loot, or belongs to a special non-player character.

Retrieved from "https://fallout.fandom.com/wiki/Footlocker_(Fallout_3)?oldid=3299344"
Community content is available under CC-BY-SA unless otherwise noted.