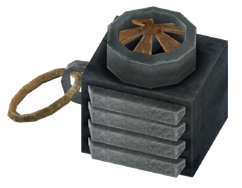 The food sanitizer is a miscellaneous item in Fallout 3 and Fallout: New Vegas.

It is awarded after finding medicine in the Super Duper Mart as part of the The Wasteland Survival Guide quest, given by Moira Brown, along with the note sanitizer instructions. According to the in-game dialogue, it will cleanse most food in the inventory of harmful bacteria, allowing greater nutritional gain.

While food sanitizers can be found in Fallout: New Vegas (prior to Patch 1.2.0.31x), they do not have as wide-sweeping an effect as in Fallout 3. The food sanitizer only affects two food items found in the game: junk food and bubblegum. In each case it adds a single point of health restoration when the item is used. Other than this minor effect, food sanitizers serve no real function and may be best sold for profit rather than kept.

Prior to Patch 1.2.0.31x, five food sanitizers could be found in the basement of the REPCONN Test Site. Four were found on the table in the room marked with "Food" signs, with the fifth found at the bottom of the stairs leading to the lower floor of the basement. The release of Patch 1.2.0.31x removed all instances of the item.

Retrieved from "https://fallout.fandom.com/wiki/Food_sanitizer?oldid=1293353"
Community content is available under CC-BY-SA unless otherwise noted.