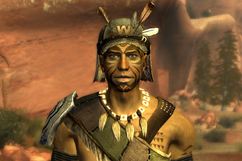 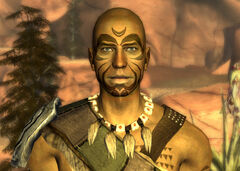 Follows-Chalk without his characteristic headdress

“Bet they don't have anything as nasty as Yao Guai out where you come from, huh?”

Follows-Chalk is a tribal living in Zion Canyon in 2281.

When Follows-Chalk was a young boy, a man came through the valley with one of the caravans: a "tall man, big moustache, carried a guitar." Follows-Chalk asked him what he did for a living, and the interpreter told him that he was a singer. "What is that?" he asked. The man explained that he went from place to place and sang for people, who gave him food and shelter and care in return. Follows-Chalk couldn't believe that there was a place in this world where a man could do that. He promised himself then that one day he'd explore that world himself.

Follows Chalk's name is derived from the fact that the more experienced Dead Horse scouts leave chalk marks to indicate areas where game is plentiful. As he is not a full scout yet, he simply "follows the chalk" of the veterans. As a young tribesman, he admits to not believing in the local taboo legends and expresses excitement when exploring taboo areas (pre-War buildings). Follows-Chalk idolizes Joshua Graham, which worries Graham, who feels he should have as little influence over the tribe as possible.

Follows-Chalk was written by Travis Stout.

Follows-Chalk ready to attack.
Add an image to this gallery
Retrieved from "https://fallout.fandom.com/wiki/Follows-Chalk?oldid=3107751"
Community content is available under CC-BY-SA unless otherwise noted.