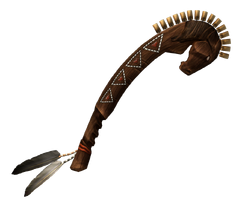 The unique war club of Follows-Chalk. It is more decorated than a normal war club and has a mane (however it should be noted that it is identical to a war club that has been upgraded with War club casings in both appearance and damage). It is decorated with beads, feathers and sinew.

It is carried by Follows-Chalk. It can not be obtained without the use of console commands.