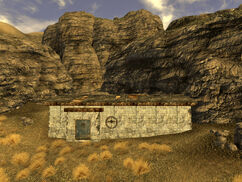 “Also, before I forget, here is a key to a safehouse you can use to rest if you happen to be in the area. I'll just mark it on your map.”— Julie Farkas

The Followers safehouse is a location in the Mojave Wasteland in 2281. It is located due west of Griffin Wares sacked caravan and to the south of Nevada State Route 157.

The Followers safehouse appears only in Fallout: New Vegas.

The beds in the safehouse

D.C. Journal of Internal Medicine
Add a photo to this gallery
Retrieved from "https://fallout.fandom.com/wiki/Followers_safehouse?oldid=3420064"
Community content is available under CC-BY-SA unless otherwise noted.
... more about "Followers safehouse"
RDF feed
Has platform
Xbox 360 +, PC +  and Playstation 3 +