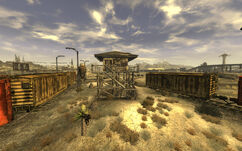 “I think that'd be best. There's a Followers outpost up near one of my old scavenging grounds. Used to do some trading with a doctor there.”— Veronica Santangelo

The Follower's outpost is a location in the Mojave Wasteland. It is located northwest of 188 trading post and southeast of the Grub n' Gulp rest stop, at the end of a small road branching off of Highway 95.

The outpost is much larger on the inside than it appears on the outside. At the base of the outpost, a hollowed-out rock can be found. The outpost consists of two rooms, the first containing filing cabinets, coffee mugs, a radio, and a broken terminal on Doctor Alvarez's desk. The second room has three unusable beds.

The Follower's outpost appears only in Fallout: New Vegas.

Follower's outpost hollowed-out rock
Add an image to this gallery
Retrieved from "https://fallout.fandom.com/wiki/Follower%27s_outpost?oldid=3218326"
Community content is available under CC-BY-SA unless otherwise noted.