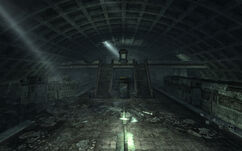 Foggy Bottom station is a pre-War Metro station on the White Line. It is part of the Metro system under the Washington, D.C. ruins in 2277.

This metro station has two major entrances from the north and south side in which toll-booths have to be passed. In the center there is a second floor waiting area with some benches and raider holdouts. Down the escalator are two caved-in metro tunnels and a serviceable metro tunnel leading east. To the west is the Metro Central exit, and the left tunnel leads to a tunnel entrance.

Foggy Bottom is a real-life area of Washington D.C.

Retrieved from "https://fallout.fandom.com/wiki/Foggy_Bottom_station?oldid=3381727"
Community content is available under CC-BY-SA unless otherwise noted.