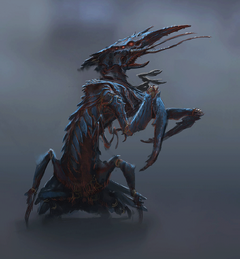 “The Fog Crawler has been mutated by the radioactive Fog surrounding Far Harbor, and is seldom encountered outside the deadly mist.”— Loading screen hint

Fog crawlers are creatures on the Island in 2287.

Fog crawlers are predatory shrimp-like creatures which live on the island surrounding Far Harbor. Fog Crawlers are a highly mutated version of the Mantis Shrimp. The different types of tail 'fans' on different types of fog crawlers could determine their gender as crayfish carry eggs under the tails or as courtship during mating to avoid injury. The existence of the smaller legs (swimmerets) on the underside of the fog crawler are evidence that it is (or was) an aquatic crustacean. It should also be noted that the chelipeds eventually fused with the arms, creating two large dagger-like appendages (chelipeds are the crusher-claws of a shrimp, similar to a crab's pincer). It seems that at some point the creature's head had evolved to become separate from the main carapace, as well as morphed into a kind of arrowhead shape for unknown reasons, possibly to be used for attacking. They seem to have eight eyes, four in a straight line on each side of the head, the the third from the left being the largest. They also seem to lack any sort of visible mouth. While the These creatures are remarkably tough, fast, and quite agile considering their size; capable of withstanding multiple Gauss rifle hits with very little loss of health and a direct hit with a fat-man on higher levels. In terms of height, the average deathclaw stands just shy of a fog crawler, making fog crawlers the third largest biological entity in the game, after the mirelurk queen and behemoth.

The fog crawler's main attacks are slicing with its arms and jabbing with its head. It also has an attack where it jumps up and slams back in to the ground, dealing massive amounts of damage to anything caught in the area of effect. This ground slam can deal damage even to targets well above the crawler's height level, such as human prey that believed itself safe on top of some object the crawler cannot mount. Due to their erect prosoma, fog crawlers can also strike at elevated targets with their arms.

Unlike mirelurk queens and super mutant behemoths, fog crawlers lack any form of ranged attack, a shortcoming they compensate for with deceptively high speed and agility. The monstrous creatures can cover considerable distances very quickly, thus making it hard to shoot them down before they enter melee range. Their speed also makes it more difficult to escape from them. It is therefore advised to always keep an ear open for the characteristic sounds fog crawlers emit, in order to avoid running into one by accident.

As mentioned above, especially the fog crawlers' higher-level variants are extremely heavily armored, boasting resistances in the mid four-digit range coupled with an obscenely large health pool. They are easily the most resilient threat the Sole Survivor can come across and arguably more dangerous than any other giant creature in the game. Deploying the heaviest firepower available is highly recommended in any fog crawler encounter past a certain level, considering some variants can shrug off multiple direct Fat Man hits without even breaking stride. Energy weapons are the creatures' only mentionable weakness due to their slightly lower energy resistance. Due to their armor-reinforced carapaces providing them with high damage resistance, ballistic weapons modified with armor piercing upgrades and/or the legendary effect "Penetrating" can pack a great deal of damage against them. Bear traps and legendary weapons with the Kneecapping prefix can minimize their threat considerably by crippling the legs. As fog crawlers move in a straight line toward their target, mines are extremely effective against them.

Being splendid melee fighters, fog crawlers can be quite hard to defeat in a melee fight, especially because of their ground pound attack that will ignore any block attempt and stun the player character for enough time to deal additional damage with its fast slicing attacks. In a one-on-one fight against them, the use of a weapon with high base damage, energy damage modifiers and/or legendary effects such as "Furious" and "Penetrating" is recommended.

Although they are most likely the Island's apex predators and usually attack any human, animal or creature on sight, it is not uncommon to see fog crawlers team up with yao guai and anglers to attack settlements in waves, attempting to destroy the fog condensers

While rather weak in comparison to their higher-level variants, basic fog crawlers are still a force to be reckoned with and should not be approached without proper equipment. Their high resistances require powerful weaponry to overcome; single-shot guns with high damage output should be prioritized over rapid-fire armaments in order to have a better chance at punching through the crawler's heavy armor.

The Pale fog crawler has a comparatively mild DR/ER, and an albino coloration.

Boasting an obscenely high damage resistance of 4000, enraged fog crawlers are the toughest non-legendary fog crawler subtype and the toughest enemy in the overall game. It is nearly impossible to shoot them down with any type of ballistic weapon before they come close enough to put their devastating melee attacks into play. Since they are also immune to radiation damage and poison, high-level energy weapons are the only tool that is even remotely effective against them, barring an extended Fat Man barrage.

An enraged fog crawler's exoskeleton is tinted a comparatively bright shade of green and covered in fishing nets and boat parts. They are fairly hard to distinguish from their cousins regardless, mostly due to the Fog making it difficult to accurately discern colors at range.

Enraged fog crawlers level with the player and are therefore immune to the Wasteland Whisperer perk.

Considering the damage resistance progression of the other fog crawler variants (+50 per tier), the enraged fog crawler's DR of 4000, compared to its ER of 350, is probably a developmental error instead of an intentional trait.

The fog crawlers resemble the arachni-lobster creature from Stephen King's novella The Mist, which also dwells in a fog. Like the Far Harbor DLC, The Mist takes place in Maine.

Retrieved from "https://fallout.fandom.com/wiki/Fog_crawler_(Far_Harbor)?oldid=2642916"
Community content is available under CC-BY-SA unless otherwise noted.