Far Harbor
“The Fog Crawler has been mutated by the radioactive Fog surrounding Far Harbor, and is seldom encountered outside the deadly mist.”— Loading screen hint

Fog crawlers are large, mutated creatures, named for their presence in foggy or cloudy coastal regions and islands, where they use the environment to hunt.[Non-game 1] The fog crawlers of costal Maine are the result of the radioactive fog around Far Harbor altering the local shrimp population.[1] While the fog crawlers in Appalachia were created as a result of the explosion of the Vault 94 G.E.C.K.. This explosion coated the area that would become The Mire with a highly radioactive fog, and rapidly altered the local plant and animal life.[2]

Fog crawlers are large, mutated crustaceans, that live in the deep Fog for which they are named, and are seldom encountered outside of the deadly mist.[Non-game 1][1] Fog crawlers are known to make deep, booming vocalizations as an indicator of their presence. They are also among the strongest and most tenacious foes encountered in their respective areas, combining excellent protection with a generous health pool and the ability to attack at range.

The fog crawler's main attacks are slicing with its arms and jabbing with its head. It also has an attack where it jumps up and slams back into the ground, dealing massive amounts of damage to anything caught in the area of effect. This ground slam can deal damage even to targets well above the crawler's height level, such as human prey on top of some object the crawler cannot mount. Due to their erect prosoma, fog crawlers can also strike at elevated targets with their arms.

Unlike mirelurk queens or super mutant behemoths, fog crawlers lack any form of ranged attack, a shortcoming they compensate for with deceptively high speed and agility. The monstrous creatures can cover considerable distances very quickly, thus making it hard to shoot them down before they enter melee range. Their speed also makes it more difficult to escape from them. Fog crawlers have characteristic sounds they emit, allowing one to detect when they are in the area.

As mentioned above, especially the fog crawlers' higher-level variants are extremely heavily armored, boasting resistances in the mid-four-digit range coupled with a large health pool. They are easily the most resilient threat the Sole Survivor can come across on the Island. Energy weapons are the creatures' only mentionable weakness due to their slightly lower Energy Resistance. Due to their armor-reinforced carapaces providing them with high damage resistance, ballistic weapons modified with armor-piercing upgrades and/or the legendary effect "Penetrating" can pack a great deal of damage against them. If their legs are crippled, they will move significantly slower.

A fog crawler's ground pound attack will ignore any block attempt and stun the player character for enough time to deal additional damage with its fast slicing attacks.

Although fog crawlers usually attack any human, animal or creature on sight, it is not uncommon to see fog crawlers team up with yao guai or anglers to attack settlements in waves, attempting to destroy the fog condensers.

While rather weak in comparison to their higher-level variants, basic fog crawlers are still a force to be reckoned with and should not be approached without proper equipment. Their high resistances require powerful weaponry to overcome.

Non-hostile by default, the ghostly variant is encountered only during Visions in the Fog.

The pale fog crawler has a comparatively mild DR/ER and an albino coloration.

Boasting a high damage resistance of 4,000, enraged fog crawlers are the toughest non-legendary fog crawler subtype. It is nearly impossible to shoot them down with any type of non armor piercing weapon before they come close enough to put their devastating melee attacks into play. Since they are also immune to radiation damage and poison, high-level energy weapons and armor piercing ballistic weapons are the only tools that are even remotely effective against them, barring an extended Fat Man barrage.

An enraged fog crawler's exoskeleton is tinted a comparatively bright shade of green and covered in fishing nets and boat parts. They are fairly hard to distinguish from their cousins regardless, mostly due to the Fog making it difficult to accurately discern colors at long range.

Enraged fog crawlers level with the player character and are therefore immune to the Wasteland Whisperer perk.

These sickening creatures have become stricken with disease, and direct contact with them should be avoided.

The fog crawler largely resembles one of the older concepts of the mirelurk queen.[Non-game 2] 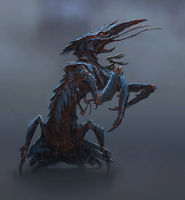 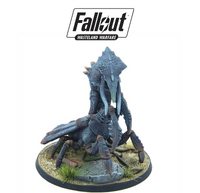