Fog crawlers are large, mutated crustaceans, named for their presence in foggy or cloudy coastal regions and islands, where they use the environment to hunt.[1] The Far Harbor fog crawlers are the result of the radioactive fog altering the local shrimp population.[2] The exact species from which fog crawlers mutated is not immediately apparent, but they are most likely a form of mutated mantis shrimp (specifically the Squilla mantis) based on the anatomy of their forelimbs and the presence of a distinctive neck which most crustaceans lack. Another potential candidate is the crayfish.

The different types of tail "fans" on different types of fog crawlers could determine their gender, as crayfish carry eggs under the tails or as courtship during mating to avoid injury. The smaller legs (swimmerets) on the underside of the fog crawler are a holdover from when it remained an aquatic creature, assuming it isn't still largely amphibious. It seems that at some point the creature's head had evolved a mobile neck similar to terrestrial insects, as well as morphed into a kind of arrowhead shape. They seem to have eight eyes, four in a straight line on each side of the head, with the one second from the front being the largest. They also seem to lack any sort of visible mouth.

They live in the deep Fog for which they are named, and are seldom encountered outside the island's deadly mist.[2] Fog crawlers are known to make deep, booming vocalizations as an indicator of their presence. They are also among the strongest and most tenacious foes encountered in their respective areas, combining excellent protection with a generous health pool and the ability to attack at range.

The average crustaceans, this is the base variant of the fog crawler.

A dominant creature, the alpha fog crawler is extremely powerful at Level 100, unmatched by any other variant.

These sickening creatures have become stricken with an unknown disease. Direct contact with them should be avoided if possible.

These mutated crustaceans show a high level of aggression, and their anger is reflected in their name. They have a yellow-green color in their appearance.

These mutated crustaceans appear darker and more unnatural than other variants.

These mutated crustaceans have absorbed so much radiation that they glow.

These mutated crustaceans are the poisonous kind.

These mutated crustaceans seem to be the albino variant.

A fog crawler variant that appears only in the Primal Cuts event.

These mutated crustaceans were further mutated, becoming one with the Scorched Plague.

These mutated crustaceans are the ones that prefer stealth.

A unique named fog crawler who has haunted Mount Desert Island for decades.

The fog crawler largely resembles one of the older concepts of the mirelurk queen.[3] 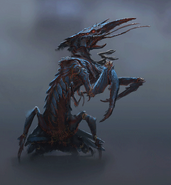 Mirelurk queen concept art, note the presence of what would later become the fog crawler