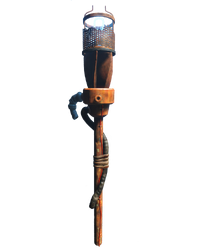 Removes the Fog from an area

The fog condenser is a world object in the Fallout 4 add-on Far Harbor.

The fog condenser technology was invented and developed by the synths at Acadia, particularly DiMA, who provided the condensers to the denizens of Far Harbor to protect them. It is for this reason that the Children of Atom residing on the Island resent DiMA, since, to the Children of Atom the Fog is holy. DiMA states only he and Acadia can properly maintain them and without their assistance, the condensers would eventually fail and the fog would consume the island.

Fog condensers are tall beam-like structures that could be anywhere from 8-12 feet tall. On top of the wooden beams is placed a small blue light that appears to absorb the Fog. Under that is a tube that constantly drips a clear liquid into a small canister at the bottom of the structure. Condensed fog can be collected from this canister.

It is a device used on the Island and Far Harbor to remove the Fog from a small area proximate to the condenser. This keeps not only the fog at bay, but also the creatures of The Island. Without the condensers the humans of Far Harbor would already have perished.

In appearance they look similar to a short lamp post emitting a blue light.

Retrieved from "https://fallout.fandom.com/wiki/Fog_condenser?oldid=3054611"
Community content is available under CC-BY-SA unless otherwise noted.