The Corvega Flying Car[1] is a vehicle in Fallout 76.

One of the most impressive achievements of pre-War transportation technology, the Chryslus Motors flying car does exactly what it says on the tin: It flies (or at least hovers). Lacking wheels of any kind, the car relies on a repulsion effect - likely Grav-plates - to transport its occupants (one driver and one passenger, seated in tandem to maintain proper weight distribution) and can achieve speeds of up to 200 miles per hour.[2]

The vehicle is extremely rare and only a handful are known to have reached private owners. These include the owners of the Sugarmaple south of Summersville and the Garrahans at Garrahan Estate.[3]

The Corvega Flying Car appears only in Fallout 76.

The general nature and inclusion of the flying car is a reference to the persistent belief in the 50s and 60s that, in the future, cars would fly instead of simply being driven. 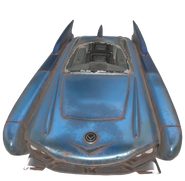 Flying car in front of the Sugarmaple

Flying car inside the Garrahan Estate

Retrieved from "https://fallout.fandom.com/wiki/Flying_car?oldid=3343531"
Community content is available under CC-BY-SA unless otherwise noted.