Unlike bloatflies and various other insects, these flies have remained largely unaffected by the nuclear fallout of the Great War, retaining their pre-War size at most. Populations of these insects can be found in various wastelands most commonly around decaying organic matter, such as dead bodies (including those of bloatflies) or feces. 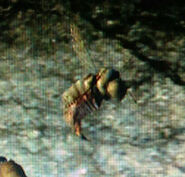 Fly from Fallout: New Vegas
Add an image to this gallery

Retrieved from "https://fallout.fandom.com/wiki/Fly?oldid=3141218"
Community content is available under CC-BY-SA unless otherwise noted.