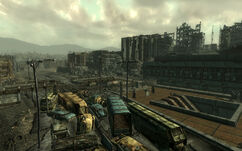 The flooded metro is a location in the Capital Wasteland in 2277. It marks access to a metro tunnel in the southwest of the urban DC area, between the Arlington Library and Red Racer factory. A large raider encampment is just to the southeast of this location, across a road full of derelict cars.

The flooded metro is located on the side of an old expressway which is littered with decrepit pre-War cars and runs under the rubble of a highway overpass. The entrance to the old metro station is located in the middle of a square at the bottom of a set of nonfunctional escalators. On the other side of the expressway lies a large raider camp, whose occupants can easily overpower a lower leveled player.

The interior of the flooded metro is a fairly long and winding maze of stairs and tunnels that connect to Mason District South at the other end. It is infested with several mirelurks up to and including kings, as well as irradiated (highly in some places) water.

The flooded metro appears only in Fallout 3.

The station appears to have meant to have been named "Flooded Sewer." The files for the flooded sewer location refer to this specific flooded metro, and even hold files for the Shocker glove and an unused metro sign. Since there is another location on the game map of the same name, it would seem that either at one point in development there was a mix-up, and this Metro was meant to be named "flooded sewer" but an oversight meant it never got round to being done, or some other situation occurred.

In real life, the metro stations and tunnels of DC are equipped with hundreds of pumps that work to ensure the tunnels stay free of water. In the event of an apocalypse like in the game, metro stations would no doubt become flooded quickly, making this location very believable.

There is a mirelurk hunter here that can sometimes teleport around to areas nearby the player, giving it the ability to sometimes surprise the player from behind. [verified]

Pulowski Preservation shelter with a Chinese Army: Special Ops Training Manual, near the metro's entrance
Add a photo to this gallery

Retrieved from "https://fallout.fandom.com/wiki/Flooded_metro?oldid=3428608"
Community content is available under CC-BY-SA unless otherwise noted.
... more about "Flooded metro"
RDF feed
Has platform
PC +  and Playstation 3 +