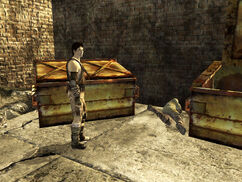 “Just some idiot that wandered down the wrong alley. Sound familiar?”— Freeside thug, referencing the corpse in the alley

Flogging a Dead Corpse[1] is a unmarked quest in Fallout: New Vegas.

When visiting Freeside, the Courier can see a destroyed building in front of Mick & Ralph's, on the other side of this building, seeing one Freeside thug waving his hand to signal them to enter the alleyway. The player character may choose to follow him, and when approaching him, he runs into a nearby alleyway. If the Courier keeps following him, he will stop next to two dumpsters, and show them a corpse, opening conversation with the player character, saying "Check it out, between the dumpsters there." The player character may choose one of three options. Any of these choices will turn him hostile, as well as the three thugs waiting to ambush them at the mouth of the alley.

They are relatively weak, poorly armed ,and tend to be extremely cowardly otherwise, often retreat during combat. If left alone, they may not be hostile afterwards and will act like basic NPCs. Also, if the player character stealth kills the waving thug before going down the alley, the other two thugs won't become hostile and instead lean against the wall with standard dialogue options.

The quest's name is a play on the idiom "Flogging a dead horse."

Retrieved from "https://fallout.fandom.com/wiki/Flogging_a_Dead_Corpse?oldid=3167077"
Community content is available under CC-BY-SA unless otherwise noted.