A floating eye as seen in Van Buren

These hovering, taser-equipped robots were mostly used as a sentry for important areas in vital facilities, such as the Sierra Army Depot VI.[4]

The aforementioned taser is mounted on the extending arm below, and can also be used to make repairs.[Non-game 1][5]

These machines are motivator (jet) driven, similarly to the Agricola mining robot.[Non-game 2]

Resembling an eyeball, its upper portion houses the CPU, motivator and the sensors. The extending arm below is equipped with a low power energy prod.

These robots are quick but fragile, and were mostly used as a sentry or for important areas in vital facilities, such as the Sierra Army Depot, or the Glow. Similar robots include the radio-broadcasting eyebot and the hover robot.

Floating eye bots are often used by the military to guard important locations, and as such can be found in many pre-War bunkers. They use highly advanced electric weaponry to eliminate their enemies but lack somewhat in durability due to their light weight. 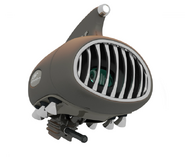 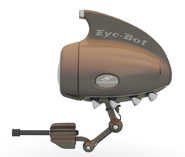 Retrieved from "https://fallout.fandom.com/wiki/Floating_eye_bot?oldid=3403291"
Community content is available under CC-BY-SA unless otherwise noted.