Wastelanders
“The enigmatic and deadly mutant creatures known as Floaters store noxious gases in their floatation bladders, which allow them to move through the air in search of prey.”— Fallout 76 loading screens

Floaters are creatures found in Appalachia.

Floaters are flatworms mutated by the West Tek FEV experiments.[1][2] Floaters are known to be friendly toward super mutants and behave almost as domesticated hunting companions, similar to mutant hounds. Some floaters that encountered super mutants in the wilderness even began to follow the roving gangs.[3]

Floaters are large, soft-bodied invertebrates, named after the flotation sacs that allow them to hover in the air. Noxious, flammable gases are generated by the creature and stored in the large flotation bladders atop their heads, giving the creature its distinctive appearance and ability to hover.[4]

When killed, floaters bring their arms to their head and emit a loud shriek as the flotation sac violently expands. Upon rupturing, the explosion spreads volatile entrails in a circular radius, leaving a lingering pool for a short duration.

Floaters primarily hunt using ambush tactics, burrowing beneath the ground and lying in wait for prey. They leave their long tongues sticking out of the dirt and emit a bright, colorful mist to attract curious prey. When provoked, the floater leaps out from under the ground with its mouth gaping open in an attempt to intimidate and startle the prey.

Appalachian floaters have developed elemental abilities. Floaters have either acidic-based, incendiary-based, or cryogenic-based capabilities, primarily stored in the sacs covering the body and limbs. This pus can be harvested and turned into volatile grenades, which, when thrown, emulate the dying explosion of a critically wounded floater.

A stronger variant that can deal more damage from their attacks based on their attribute to either acid, fire, or frost.

An even stronger variant that has more Damage Resistance and delivers stronger attacks based on its attribute to acid, fire, or frost.

The strongest variant found in Appalachia.

Floaters appear in Fallout 76, introduced in the Wastelanders update.

A trio of mischiefs 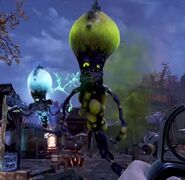 Floaters seen in the Wastelanders trailer 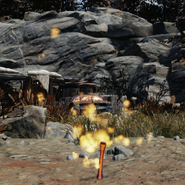 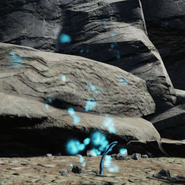 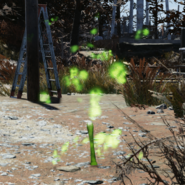