Floaters are a unique mutant of unknown origins and known terrifying appearance.

An offshoot of West Tek experiments on flatworms from 2075,[1] floaters are unique creatures that were widely deployed alongside Unity forces, together with centaurs. Following the death of the Master, floaters became ubiquitous in the Central Valley in New California, preying on unwary travelers entering the regions.[2] Fortunately, they are quite scarce elsewhere in the wasteland, apart from Appalachia.

The floater is a large, soft-bodied invertebrate, named after the flotation sacs that allow it to hover in the air. Noxious, flammable gases are generated by the creature and stored in the flotation bladders, giving the creature its distinctive appearance and ability to hover. The sacs are of various sizes and dangle along the underside of the mouth. As the flotation gases are highly flammable, energy and flame weapons are notably effective and may cause the creatures to suddenly combust.[3]

The primary mouth comprises a majority of the top of the creature's disk-like "head." Surrounded by sharp teeth, the funnel-shaped aperture can be radially opened or closed. A long tentacle is able to rapidly protrude from the mouth, ending in a prehensile cross-shaped maw. When a floater attacks prey, the head lowers with the mouth pointing directly toward the target. Its tongue-like tentacle maw is abruptly launched forwards, spiraling through the air while grasping at the target. A smaller mouth, denoted the fore mouth, appears as a slit running from the bottom brim of the head into the gaping primary mouth.

Despite its awkward and uncoordinated appearance, floaters are remarkably fast. Aided by flotation sacs, the creature uses its flexible body and tail to slither and propel itself along the ground. At the base of the head, floaters have an ovipositor used to lay eggs, although only asexual reproduction was observed in the original FEV samples.[1]

In place of a brain, floaters have a rudimentary ganglion inside the bow of the head, similar to non-mutated flatworms. The pathways are sufficient for the creatures to recognize prey and members of its pack, but leave them unable to work in cohesion. Floaters often haphazardly swarm any target in sight, making them tenacious adversaries despite their relative simplicity.[4][5][3]

Only one variant of the floater exists across New California, and is frequently encountered in packs. The Unity harnessed floaters for use as war animals, accompanying patrols across the wasteland and protecting key locations in their domain. After the fall of the Master, packs of floaters and centaurs began to appear across the Central Valley, with another used by the Enclave to deny access to the navigational computer onboard the PMV Valdez.

Floaters appear in Fallout, Fallout 2, and Fallout 76. The Art of Fallout 3 includes concept art for a lamprey floater, manowar tendril floater, and needle tooth floater. Creatures named floater budding and floater evolved also appear in the files of Fallout: New Vegas, though they use the centaur model, a legacy of development. 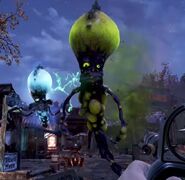 Floaters as they appear in Appalachia

Concept art of floaters in Fallout 76

Retrieved from "https://fallout.fandom.com/wiki/Floater?oldid=3218975"
Community content is available under CC-BY-SA unless otherwise noted.