Floaters are creatures found in Fallout, Fallout 2, and Fallout 76.

The floater is a large, soft-bodied invertebrate, named after the flotation sacs that allow it to hover in the air.[Non-canon 1] Parts of its body include a head, mouth, fore mouth, float sac, tail, ganglion, and ovipositor.[1] Floaters are often found in groups with super mutants and centaurs. 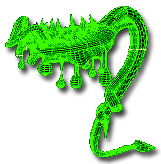 Concept art of floaters in Fallout 76