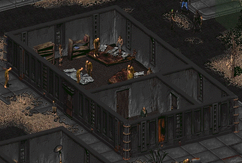 Flick's Slum is a store in the Den, run by Flick and occupied by a large number of addicts.

The store is made up of three rooms, with the entrance area housing a large number of addicted customers who, judging by the mattresses on the floor, live here as well. Flick himself works out of a room on the southern side, with an empty room on the south-east side.

The children who wait outside the door of this location will attempt to steal from the Chosen One as he enters.

Flick's Slum appears only in Fallout 2.

Retrieved from "https://fallout.fandom.com/wiki/Flick%27s_Slum?oldid=2908372"
Community content is available under CC-BY-SA unless otherwise noted.