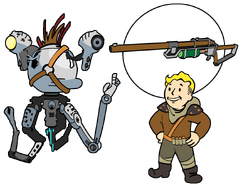 “Rose wants someone to try out some Raider tactics so she can gauge their effectiveness.”

Flavors of Mayhem is a main quest in Fallout 76.

After completing Signal Strength, Rose will task the player character with learning the tactics used by the five raider gangs that once existed in Appalachia to see which works the best.

The first gang Rose tasks the player character in following in the footsteps of is the Cutthroats, who used the weakening chem Karma against their enemies. Rose will give the player character Rose's syringer and ask them to modify it with a Karma syringe barrel mod. After adding the mod, one is instructed to shoot a yao guai with Rose's syringer and then kill it while it is under the influence of Karma.

In doing so, the target will become stronger for 60 seconds, and then, for 60 seconds after that, will become significantly weaker. The quest marker will take the player character to Monongah Overlook, where they will be asked to defeat a stunted yao guai. If the bear at the Overlook is already dead, you can server hop until you find it alive.

It is not necessary to defeat the specified yao guai at Monongah Overlook. Shooting any yao guai with the syringer and subsequently defeating it will also complete the quest. One choice is the Philippi Battlefield Cemetery as a yao guai always serves as the area boss there. Otherwise, low-level yao guai can be found all over the Toxic Valley.

The next gang whose tactic must be learned is the Trappers. As their name suggests, Trappers were known for using a variety of traps, and Rose instructs the player character to go to the Sons of Dane compound, where they will find the ingredients needed to build explosive bait. After finding the ingredients and crafting explosive bait one must use it to kill an enemy.

Rose will then bring up that one of the gangs, the Diehards, were not like other raiders because they were against un-aggravated killing, and that if they had any tactic it would be making friends. Rose will then send the player character to "make friends" with a deathclaw. Getting in proximity to and interacting with the deathclaw causes it to attack, with Rose stating she didn't actually think the player character would do it, and give the options of either fleeing from the deathclaw or killing it. The deathclaw can be dead, resulting in a long wait time for a spawn.

Following the encounter with the deathclaw, Rose will mention the Blackwater Bandits' thievery expertise and tasks the player character with stealing a weapon from a super mutant camp; the weapon stash can be located at Relay tower HN-B1-12, Summersville, New Gad, or a number of other locations. The details will be marked on the map. While Rose emphasizes the gang's use of stealth, it is not required to steal the weapon without being spotted.

The final gang to be emulated is the Gourmands, who Rose remarks as being cannibals and sends the player character to kill a group of feral ghouls and eat one. Several locations where feral ghouls are normally found will be marked on the map, including near the Charleston Fire Department, The Whitespring Resort, and R&G Processing Services, where Site Charlie is hidden. After killing the ghouls, Rose will comment that she won't make anyone eat another human or ex-human, and the optional objective to cannibalize the ghoul appears. Regardless if one eats the ghoul, Rose tells the player character to return to the Top of the World for their reward and the next part of the raider questline, Key to the Past.

Retrieved from "https://fallout.fandom.com/wiki/Flavors_of_Mayhem?oldid=3393158"
Community content is available under CC-BY-SA unless otherwise noted.