The Flatwoods monster is a creature in Appalachia in 2102.

The Flatwoods monster is a humanoid creature of seemingly extraterrestrial origin. Its head is encased in a purple space helmet, which obscures its face save for its glowing white eyes. The rest of its body is sealed in a protective suit, with an armored breathing apparatus and a large spade-shaped frill on its back. The Flatwoods monster has no visible legs, its suit instead terminating to a bullet-shaped point at its bottom, with what appear to be small hover-jets around its waist, allowing it to float above the ground. Its long arms are tipped with large, three-fingered hands clad in large black gloves. It can be encountered in a random encounter in which, if approached or shot at, it will suddenly disappear along with a flash of light, or if it is a hostile variant, it will engage the player character using teleportation to move around. It is possible for it to spawn alongside the mothman.

The Flatwoods monster purportedly took Colton Pickins onto its spaceship and performed experiments on him, however that account was disbelieved by the responding police force.

If encountering a glitched Flatwoods monster, one can see beneath its suit. They can see inside its machine, the occupant is diminutive inside as one can see its legs within the body casing.

During combat, the Flatwoods monster will teleport around. It regenerates lost health when nearly dead multiple times. It can also take control of other creatures and robots around it and use them to defend itself, indicated by the purple glow around the creatures under its control. Killing it counts towards the "kill different kinds of human-like creatures" challenge.

The Tales from the West Virginia Hills magazine issue #5 will provide an additional 15% damage against the Flatwoods monster.

The base variant of the creature, with all of the above attributes.

An elusive variant, this Flatwoods monster has increased health and laser damage, although its resistances are the same.

This powerful Flatwoods monster has even higher health and attack damage, being the strongest of all three variants.

The Flatwoods monster is based on West Virginia folklore. The Flatwoods monster was encountered by Fred and Edward May and their friend Tommy Hyer, who claimed to have encountered an alien creature after investigating a mysterious light that flew across the sky and appeared to have landed in the woods. The hovering monster was described as being ten feet tall with a green body and clawed hands, as well as a red face, glowing yellow eyes and a head shaped like an "ace of spades."

Tales from the West Virgina Hills 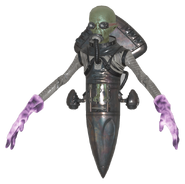 The Flatwoods Monster as seen inside the NIF file, seen without its traditional helmet and glow.
Add an image to this gallery

Retrieved from "https://fallout.fandom.com/wiki/Flatwoods_monster?oldid=3066501"
Community content is available under CC-BY-SA unless otherwise noted.