Fallout 76
“In pre-war West Virginia, near the town of Flatwoods, many claimed to see a dark, mysterious figure with glowing eyes. Was this Flatwoods Monster some kind of demon? Or something far worse?”— Fallout 76 loading screens

Flatwoods is a town in the Forest region of Appalachia.

A town on the Flatwoods River, known for tales of its namesake monster. Entryway signs reading "Home of the Green Monster" can be found at the town's entryways. The only current residents of Flatwoods are Heather Ellis and her dog, Chloe.[1][Non-canon 1]

After the war, Responders settled here in an attempt to help survivors. The local reverend, Delbert Winters, born and raised in Flatwoods, offered to volunteer as well as provided his church as a location for their outpost.[2] The group began to offer training, shelter, food, water, and a purpose to the survivors of the Great War.[2][3]

Flatwoods is a small town with two main roadways - Church Street and Bridge Road. Heading south from the overseer's camp, the road leads past the Green Country Lodge and a house where the body of Willie Mae is found.

Heading under the Green Country Bridge, the church and tavern come into view. Bridge Road is a left hand turn from here, and to the right is the house in which Sofie Yates' remains are found. Down Bridge Road, both Colonel and Jeremiah Ward are found deceased in houses to the left. Vesta's Housewares is located on the right. Heading west down State Route 86B leads to the Vault-Tec Agricultural Research Center across a bridge over the Flatwoods River.

Continuing on Church Street leads to the meeting hall, a yellow house with a tinker's workbench and a weapons workbench, and the Responder command center at the church, and the Flatwoods Tavern. The tavern has two floors, with a large cooking area established in the adjacent parking lot where Rev. Delbert Winters taught residents how to cook after he encountered survivors eating "raw rat carcass behind a dumpster."[2] The automated training kiosks are set against the northeastern wall on the first floor, offering training as a Responder volunteer.

Past the tavern is a parking lot with a cooking station and moving forward leads to the trailer of Delbert Winters, inside of which his remains are found. On the south side of town is a Red Rocket gas station that has a stash box within it and a tinker's workbench on the outside/rear. A few feral ghouls linger around the Red Rocket.

South of the Flatwoods Tavern are several more locations including the house Nurse Scott's body is found, the community garden, and a tent campsite. Several harvestable items can be found in the garden, including silt beans and mutfruit. The tent city is a mix of destroyed and intact tents and has several ghouls laying on sleeping bags until the Vault Dwellers approach and a mix of crafting and consumable items. The holotape I hate Flatwoods can be found under a white pillow in the white tent on the right of the camp.

Flatwoods appears only in Fallout 76.

Flatwoods is based on the real-world town of Flatwoods, known in West Virginia folklore as being home to the Flatwoods monster, located in Braxton County.

The exterior cooking area of the Flatwoods Tavern

The exterior entrance of the Flatwoods Tavern

View from the bridge

Last will and testament of Jeremiah Ward

A reminder to myself 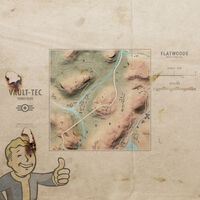 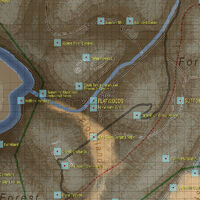